Today we explored the area around Happy Valley Goose Bay. Right after breakfast we went to a small village called North West River about 30km from Goose Bay. North West River hosts the Labrador Interpretive Center, which was opened in 1997 by the Queen. The Labrador Interpretive Center has a permanent exhibit on the life of Labrador's people and a temporary one with amazing pictures from the Torgat Mountains in the very north of Labrador.

The following pictures illustrate the life of a trapper's family. Many of them were paid by the Hudson Bay Company to come to Labrador. After five years they could decide to stay in Labrador or to be brought back to England or Scotland. 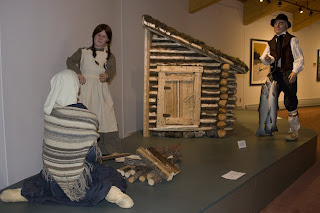 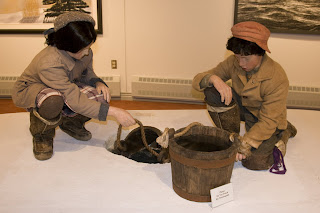 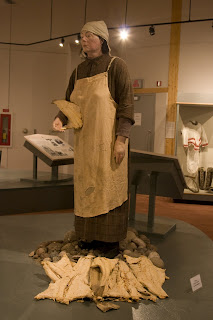 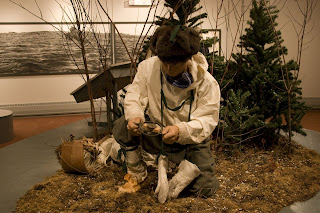 Picture of an Inuit with his canoe. 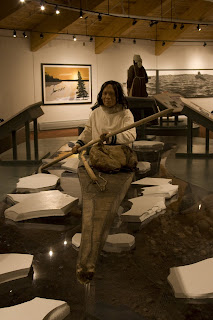 This sculpture has been created by an Inuit artist. 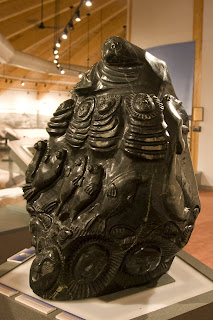 This is an "Inukshuk", a well known symbol of the arctic which has been used by the Inuit as landmarkers. In Austria we can see them on almost every mountain - we call them "Stoanmandln" (stone men). 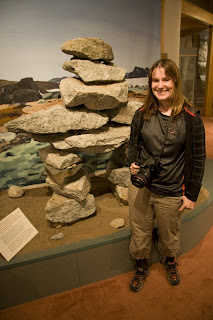 This is a picture of a so-called "shaking tent", "operated" by a shaman. It is like a weather forecast telling the Innu if and where they can find food. 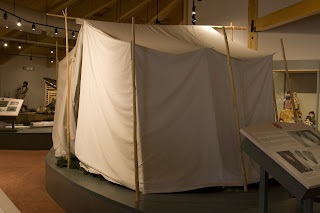 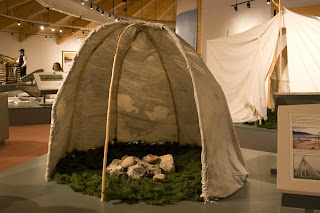 From the Labrador Interpretive Center we drove to Sunday Hill and were rewarded with a beautiful view on the lake and the bay. 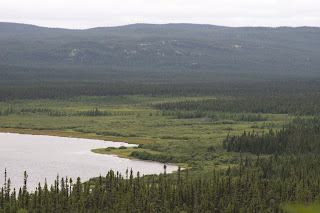 Next stop was the Labrador Heritage Museum which is located in a building of the Hudson Bay Company which used to be a trading post for more than 300 years. A main part of the exhibit was on the life of the trapper families. Men were away from there families 5 months a year while hunting. Each trapper owned and still owns his own trapping line and there is a rule not to put any traps on the line of others. When a trapper dies the trapping line is inherited by his youngest son. By age 14 boys joined their fathers on their trapping line for one season. The next year they already had to set out their own line. Along their trapping line hunter have installed small log constructions called "tilts" where they could stay overnight and leave food supplies. 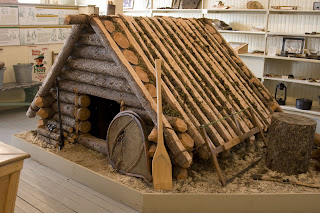 Women stayed at home taking care of the houshold, collecting berries, sewing, making clothes, doing repair work etc. Ships from St. John's came twice a year to North West River for trading and to bring supplies. When the airbase in Goose Bay opened in 1942, many trappers went there for better paid jobs. However, trapping is still done today, but with speedboats and
snowmobiles.

After visiting the Heritage Museum we went to the Tea Room of North West River to have lunch, enjoy a cup of tea and later took some pictures of the beach. 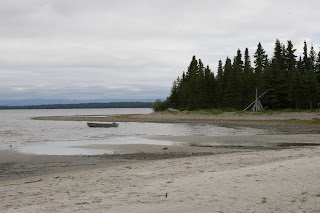 On the way back to Goose Bay we took this picture of an real Innu tent. At 3 pm we had to be at the ferry terminal to get on the ferry to Cartwright which was supposed to leave at 5 pm. On the ferry I was totally surprised to find that there is free Internet available. Isn't this amazing?

A very interesting story :-) and God bless them for the free available Internet ;-) Cheers Joanna