Our journey went along the south shore of the St. Lawrence river. The first major stop we did was at Tadoussac, which is a pretty village nicely located at the mouth of the Saguenay fjord. 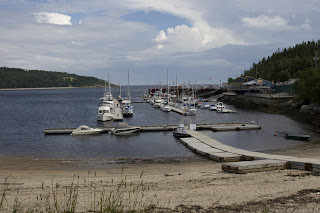 In Tadoussac a whole industry has been built around whale watching, which is not really surprising as this is one of the best places in the world to see blue whales. However, the St. Lawrence river is not only a habitat for blue whales, but also all kinds of other whales too, as we learned at the discovery center. After visiting the exhibition we did a boarldwalk trail starting from the discovery center, which follows the shoreline along a small peninsula and rewarded us with some great views of the fjord and the river. 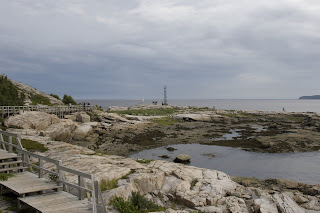 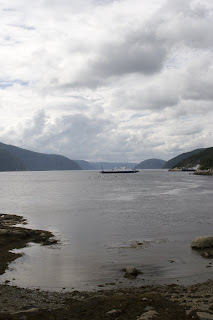 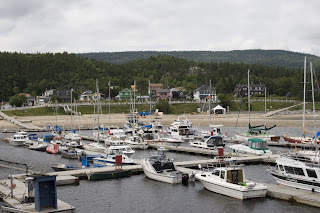 Whale watching is not the only thing you can do in Tadoussac as there are plenty of oppurtunities for outdoor sports like sea kayaking or cycling.

From Tadoussac we drove to Baie-Saint-Marguerite with the hope to see Beluga whales which come to the area around Baie-Saint-Marguerite regularly. Baie-Saint-Marguerite has a visitor center with an exhibition on the life of Beluga whales which we could not visit due to our very tight schedule :-(. When walking around the visitor center to take some pictures we saw within 2 minutes a garter snake and a groundhog :-). From the visitor center center a 3 km trail brought us to the viewing platform. It just took us a few minutes to spot the first Beluga. However, when you expect the Belugas showing much of their body you can easily be disappointed as only the very top of the Beluga raised above the waterline and except for this only their fountains could be seen. When we were at the observation deck at least 10 Belugas were around which is somehow really impressive. 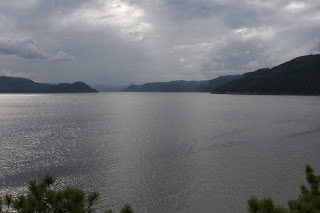 The night we spent at Baie Comeau which is a not particularly nice industrial city. For dinner we got the recommendation to go to Cafe Orange Bleu which is a small bistro near to our motel, which really turned out to be a success as the food was excellent there.